When a nobleman’s first duty is to produce a male heir, women are treated like possessions and bargaining chips. But as the aftereffects of a world-altering spell ripple out physically and culturally, women at last have a bargaining chip of their own. And two women in particular find themselves at the crossroads of change.

Alys is the widowed mother of two teenage children, and the disinherited daughter of a king. Her existence has been carefully proscribed, but now she discovers a fierce talent not only for politics but also for magic—once deemed solely the domain of men. Meanwhile, in a neighboring kingdom, young Ellin finds herself unexpectedly on the throne after the sudden death of her grandfather the king and everyone else who stood ahead of her in the line of succession. Conventional wisdom holds that she will marry quickly, then quietly surrender the throne to her new husband…. Only, Ellin has other ideas.

The tensions building in the two kingdoms grow abruptly worse when a caravan of exiled women and their escort of disgraced soldiers stumbles upon a new source of magic in what was once uninhabitable desert. This new and revolutionary magic—which only women can wield—threatens to tear down what is left of the patriarchy. And the men who currently hold power will do anything to fight back.

This book is marketed as “feminist fantasy” and it is so obvious from the very beginning. In this society women are seen as lesser, not even allowed to study magic, though they can still see it, and elements of magic are gendered, therefore feminine elements are considered less than. The entire book sets up this patriarchal society just to dismantle it and it is quite a feat. Much of the plot is just women characters essentially saying “but that’s not how it’s done” then doing it anyway.

One of the main characters is Alysoon, she is the illegitimate daughter of the king, aged about mid-40s, and once the spell to change magic is cast, she immediately begins learning magic elements and putting them into practice. Alys’ mother is the one that cast the spell, causing an earthquake, and irrevocably changing women and magic (Alys’ mother is the Abbess, or leader of the Abbey of the abigails–more on that further down).

If there’s one take away here let it be that this fantasy novel took this quote and made it real: “If it’s a legitimate rape, the female body has ways to try to shut that whole thing down.” – Rep. Todd Akin (R-Mo.) (2012)

The changes to the magic at first seem small: the magical element Rho changes its form. Then we find out that the spell changes fertility so only a woman who wants the child will keep the child. Then we find out that if a woman is raped, she produces a magical element called Kai, previously only seen when a man is dying in battle, that they can use in spells without the women themselves perishing. This is the biggest threat to men as the book goes along because women’s Kai, when used against men renders them impotent. Another consequence of the spell is that a Well of magic appears in the wastelands that border two kingdoms, the well produces magical elements that were previously unknown or rare. This makes the place valuable, but because they are labeled as feminine elements the immediate importance is not known to men in leadership positions.

Another primary character is Ellin, who succeeds the throne after all of her immediate family is killed in the earthquake that kicks off the novel. All of the men in her court are trying to marry her off and be done with her, but she embraces being queen in such a short period, and rebuffs the men’s decisions at each turn. She has to navigate this world of rumors and alliances, and with little training, she really comes into her own. By the end of the novel she’s come into her own as queen and I’d really like to know more about how her reign will go in the next book.

One of the issues I had with this book was that there were too many perspectives. I’d say it’s a book about Alys and Ellin, but actually, the book jumps between so many different characters, at first it’s hard to keep up. Chanlix is also a voice prominently featured in the book. She is the new leader of what is essentially a whore house/convent after the earthquake. All women who are divorced, un-marriageable, and otherwise hideous, are sent here to service men and create simple spells. The “abigails,” as they are called, are blamed for the spell and banished to the wastelands, but they discover a new Well of Magic, that they keep secret. She’s also falling in love with Alys’ brother, who is tasked with protecting the abigails. She has no idea what she is doing, but at least she acknowledges that and turns to others for help.

Another quiet perspective is that of Shelvon, she is the wife to Delnamal, whose only purpose is to produce a male heir. Her pregnancy is terminated when the spell is cast because the spell knew that she did not want the pregnancy. The marriage was not built on anything other than alliances and Shelvon was constantly put down by her husband.  Despite her quiet nature, she has the biggest character change. Her fate is not clear at the end of the book, but in the end she stands up to her husband, and does the right thing.

The main antagonist, Delnamal, is also a POV in this book. He succeeds the throne (small spoiler), threatens Alys and the abigails, and is generally a horrible person. He feels a duty to his kingdom, but also a personal vendetta against his half-siblings (Alys and Tynthanal). In contrast to Delnamal, Tynthanal is respectable, level-headed, and honorable. He understands that the change in magic can be useful—not threatening—so he allies himself with those who Delnamal seeks to destroy.

For all this feminism and dismantling the patriarchy there’s one element of this book that is lacking. The book is not very intersectional. There are hints that some of the characters are “tawny” with “raven” or hair, but otherwise, there are barely any other descriptions of skin color (despite how many times Alys and Ellin are described sitting in front of a mirror!). Ellin is described with “black braids and coils” at one point after the earthquake, while Alys is described with wearing only one braid, no color descriptor, but her brother Tynthanal has brown hair and “nut-brown skin.” Should we infer that Alys looks similar since they have the same parents? In fact, the only characters who are described in any detail are those of “Nandel” origins, like Shelvon, they have blonde hair, blue eyes, and pale skin, which to other places like Alys’ home, are not desirable traits. There has been discussion online that lack of description usually defaults to white–and this is overwhelmingly accurate. This is what I felt while reading the book. I think there are hints that not everyone is white, but I think the character descriptions for the women could have been flushed out more. Other basics of intersectionality like LGBT+ characters, characters with disabilities, or people of color are not present, either. Which is surprising considering there was a convenient scapegoat in the Abbey for them to go in that society. I’m disappointed because otherwise this is a very strong start to a series, but through the lens of feminism today it’s glaring obvious what is missing. I even went through my copy of the book again to see if I could find descriptors for characters other than clothes, but I didn’t find much other than what I mentioned above.

On a related note, I just want to include a trigger warning for rape. There is a violent scene after the earthquake. The storytelling purpose is so the women (plural) who are raped gain the magical element Kai, described above. There is also other violence in the book, but this is the most jarring. Literally the purpose of the Abbey is for men to have their way with women, where they pay, but the money goes to the Crown, but this system dissolves once the earthquake happens. However, I also want to point out that there are sex-positive relationships in the book as well. Ellin goes after her crush (very forward!), and then finds a trusting relationship with another man (potential for marriage, too), and Chanlix and Tynthanal start a respectful relationship when they reach the new Well. Alys is a widow, but her relationship with her former husband is described as consensual. See? Feminism!

I was also frustrated reading the novel because it wasn’t clear what the characters motivations were. The middle of the novel is just describing the day to day plans, but I felt that there wasn’t action. Alys, for example, is learning magic and trying to find a husband for her daughter to protect her from a worse marriage, but it isn’t until the third act that Alys has some sort of purpose for learning spells. Ellin also falls into a similar trap. She is the figurehead for the monarchy, but every time she has an opinion she’s thwarted by members of her council. We don’t understand what she actually wants or what is motivating her to stay on the throne until much later, and even then the arc of her character development is slow going, so much so that the end of the book leaves questions about her moral compass—in a good way. It just took so long for us to get there.

To sum up, despite my criticism, I’m still very much interested to see where this series goes. The characters and magic system are complex and fascinating. It’s rare that a fantasy book, dare I even say dark fantasy, would even attempt to dismantle the societal systems like this and I think there is room for improvement. I would recommend this as an antidote to Game of Thrones or Kingkiller Chronicles. 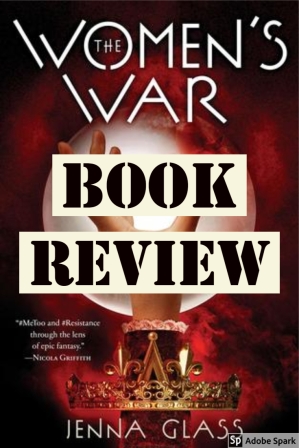 2 thoughts on “REVIEW: The Women’s War by Jenna Glass”