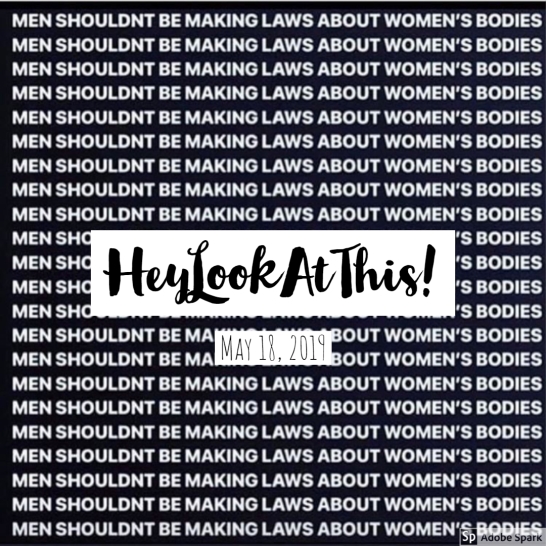 Hope everyone is having a lovely week, except those who support the GOP. This isn’t my usual format for these weekly recaps, but these abortion laws have been weighing heavily on me.

What an infuriating time to be a citizen of the United States. As if the Georgia 6-week abortion ban was bad enough (at 6-weeks pregnant you don’t even know if it’s just a missed period! That’s how women’s bodies work!), this week we’ve seen the Ohio (no, ectopic pregnancies can not be moved to the uterus), Alabama, Kentucky (though blocked by a judge could face a lengthy court battle), and Mississippi state legislatures pass similar abortion bans. While more southern states also are trying to pass abortion bans: Tennessee, Missouri, South Carolina, Florida, Texas, Louisiana and West Virginia (source). Our right to a choice about our bodies are being taken away! Every woman should have the right to choose what to do with her body. PERIOD. FULL STOP. Apparently life is so precious that women are going to be forced to carry to term a baby they don’t want, even if it conceived by rape or through incest. Abortions are health care.

If the GOP and republican party actually cared about the child, they would also support programs that would help raise it like education (Alabama is ranked 50th, by the way) or welfare. Not to mention if the GOP cared about human life they would not be detaining people (not illegals, actual human people) at the border. The images coming out of Texas will haunt America’s history forever. Since every evangelical is a hypocrite, they decide that their religion is more important that a human woman. There is no defense for this. Abortion laws punish women specifically. Rapists in Alabama will see 2 years of jail time for 99 years of an abortion provider. HOW FUCKED UP IS THAT?

I’m so angry. These types of bills affect minorities and people in poverty even more, causing the people on the low end of the class spectrum to feel the full brunt of decisions made by those elected officials.

This administration has brought about some of the worst of humanity. Groups like ACLU will sue the government to overturn these bills, but if it’s appealed to the Supreme Court (currently filled with a majority conservative judges thanks to the Trump administration), the ruling of Roe v. Wade could be overturned. These are dark times.

Donate to Yellow Hammer Fund in Alabama to help provide care for people seeking abortion, and ACLU to help fight these bills.