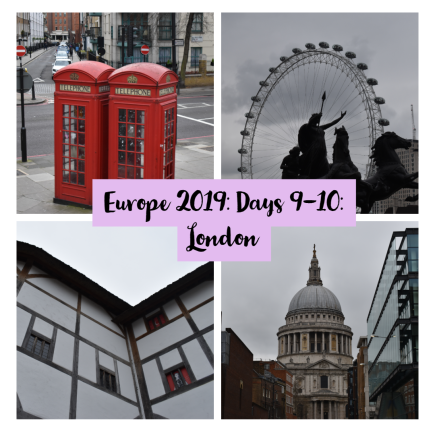 This whole trip was unreal, first Paris, then Florence, a day in Rome, and then Dublin and Galway!

I definitely wasn’t expecting all the excitement yesterday in our surprise day in Ireland. From Galway we drove back two hours to Dublin, dropped off the rental car, took an hour and a half flight and landed in Gatwick airport, all still in the nice clothes we had been wearing all day! We took a taxi from the airport because we were so tired. If we had to do the London arrival over again we would have figured out the commuter rail that was at the airport because the taxi was not cheap! We finally arrived to our Airbnb in the Bayswater neighborhood, near Kensington Palace, off the western end of Hyde Park.

My co-worker recommended Kahn’s Restaurant in Bayswater for great Indian food, so that’s where we headed once we checked in and dropped off our luggage, it was only a few blocks from where we were staying so it was super convenient. We changed into more casual clothes since traveling made us feel gross. Kahn’s was so delicious. The portions are huge, there’s a lot of vegetarian options, and the atmosphere is casual, but not informal. It was the perfect meal after a long day.

We’d made reservations for the Pavillion at Kensington Palace (formerly known as The Orangery) in advance for lunch so we started the day kind of slow. We couldn’t really do much in terms of touristy things, so we had breakfast at a cafe nearby called Urban Baristas, and then went back to the apartment to change into fancy tea clothes. This Airbnb was on the 6th floor, so the all the up and down was exhausting!

We arrived early and had a photo shoot in the garden to celebrate our engagement! The sun peeked out for a moment to give us some light. I think they turned out super nice! #portraitmode

We had only expected lunch service for our reservation, but they were offering tea service so we didn’t turn that way! We ordered a bottle of champagne along with the tea for extra indulgence. I loved the tea sandwiches and little bite-sized desserts. Everything was yummy! The tea service was a couple of hours altogether. I was also able to request a vegetarian plate so that is always appreciated from me! I also liked that the desserts served on each tier weren’t exactly the same so we were able to share with each other.

Our lunch was only a 10 minute walk away from the apartment so we returned to change out of our dress clothes into our clothes for adventuring! At this time I also killed a cockroach that was in our apartment, but I didn’t see any other bugs our entire stay, still unsettling! The reason the trip to Galway worked so well is that we didn’t make many concrete plans for London (This was intentional on Josh’s part, he wanted to keep our plans vague so he could plan the surprise day in Ireland). We could have dedicated a day to a museum or walking around ourselves, but because we were off by a day we decided to go the Big Bus Tour route again. We bought tickets online and the pick-up wasn’t far from where we were staying. The bus routes in London are a bit longer than in Rome so we did have to wait about 20 minutes for a bus to arrive. We stayed on for the entire route because we started late in the day and we weren’t able to hop on and off. I still felt like we saw a lot, but it would have been nice to have a second to explore the areas we were passing through. I had been to London a few years ago so a lot of it was still fresh in my mind.

Our route started in Bayswater, then went through Paddington, going around Madam Tussauds and passing St. Mary’s Hospital where Royal babies are usually delivered. We switched to a different line at the Marble Arch (from the blue line to the red line in the map below) to see the other side of the Thames. This route took us by Soho and West End, toward Trafalgar Square, where we rode past Scotland Yard and Blackfriars, through the City of London, over London Bridge, then back over Tower Bridge, Where we circled back and ended up in Westminster to see Big Ben (under construction) and the Westminster Abbey, before departing at Buckingham Palace. I have to show you a map because my summary just misses so much! 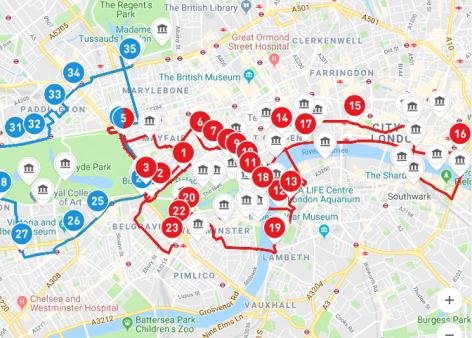 I love all the quintessential British imagery we saw along the route, like statues of dragons. It was also very interesting when the tour guide would point out which buildings were “new,” built in the 50’s after the bombing of London in WWII. One church we passed had shrapnel damage on the side of the building, which was intentionally left there after structural repairs were made. Based on what I know from my previous visit and this bus tour, London rebuilds itself every 100 years or so either from fire, plague, or war–always resilient. We hopped off the tour around 6pm to look at Buckingham Palace, the queen was in! We went to a place near the palace called Albert for dinner. Really enjoyed the food and vegetarian options for my dinner (vegan fish ‘n chips?!). After we warmed up in the restaurant and had our meal, we took the tube to our apartment. A long day!

Our flight was at 5pm so we didn’t have much time to go to museums or anything like that. Instead, we booked a tour at the Globe Theater for 10am. We ended up getting breakfast at a quick cafe, then going back to our apartment to grab our luggage and check out. We took the tube (that was delayed!) to Blackfriars, where we found a luggage storage place online that was paid hourly called LuggageHero. The storage was within a convenience store so we took a leap of faith that nothing would happen while we were on the tour. We booked it across the Millennium Bridge with a minute to spare before the tour started! I remembered a lot from the last time I visited, but I was glad to go again so Josh could have the opportunity. The theater wasn’t doing plays at this time of year so we weren’t able to see one while we were there.

After the tour we went to St. Paul’s Cathedral. I thought I remembered it being free to enter, but when we got there the entrance fee was 20GBP. With our time constraints, the amount of money we already spent at this point, and general energy levels, we decided 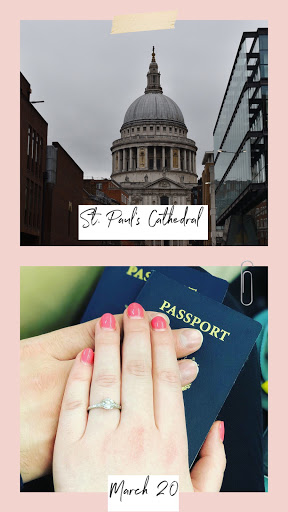 that it wouldn’t be worth it this time around. We grabbed our luggage (it was safe!) and went to the Blackfriars train station. We realized yesterday that there was a commuter rail that went straight to Gatwick so we wouldn’t have to take a taxi there. This saved us so much time and money! It was super simple to get there so I’m frustrated that we didn’t know of this option when we initially landed.

At the airport we bought a few souvenirs at the Duty Free shops, like a bunch of chocolate and some things from Cath Kidston, had lunch, and waited for our plane. Norwegian really bit us in the butt on this return trip, though. They weighed the bags as we were boarding the plane. Their policy is that both the carry-on and personal bag can’t weigh more than 10kg, but they only made me check my bag out of the two of us? We were told there’s a weight restriction for both items together, which I SWEAR was not on the website when we left 10 days prior! It was a rip off. The only reason they bothered was because the plane wasn’t full and they were trying to make up the difference. Literally half of us had to check a bag for this reason. We had a seat open next to us on the flight! And there were plenty of open seats in the cabin. I’m still mad because we had tried so hard prior to our trip to avoid this by buying these specific little suitcases so that our bag wouldn’t be checked, meanwhile people are bringing extra-large carry-ons and they don’t even bother to measure!  I have a whole rant/ blog post about the hidden costs of our trip coming up and this was one of them!

Besides this, our journey home was uneventful. We landed around 11pm and took a taxi home. Finally reunited with our kitty!! 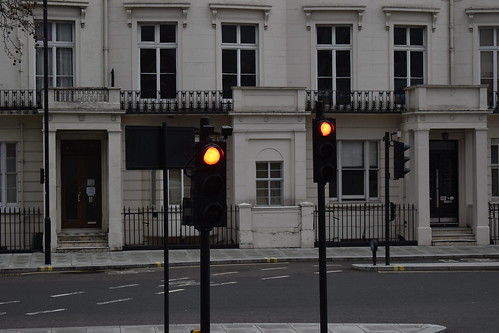 What can I say about this whole experience? Traveling through Europe with my best friend, getting engaged(!), doing new things, exploring new places, this trip was a whirlwind in the best way.

Maybe next time we take a vacation it will be in one country or be on a beach? ♥