Wow, what a trip this has been! Go, go, go from the start. We’ve been drinking Emergen-C most days to keep any sickness away. We’d previously been in Paris and Florence! On this day we took the train from Florence to Rome. We got there in a little less than two hours. Our check-in for the Airbnb wasn’t until 2pm, so we dropped off our luggage at a storage locker near the train station that was paid hourly. We grabbed a Big Bus Tour of the city so we could see as much as possible, but also with the ability to jump on and off the routes. This was a good decision for us. If we had been here for a longer time we would have just walked.

Here’s our adventures for Rome in a day!

The Big Bus Tour started at the train station. I took a lot of pictures, but because I was on the top of the double decker bus, the pictures didn’t turn out that great. We did one loop around the route to get a sense of what we wanted to do for the rest of the day. We found out that we could get passes for the Colosseum through Big Bus, so once we saw it on the route we knew we wanted to do it. Also, the Colosseum tickets bypassed the line, saving us a ton of time. The route took us all over, there was a stop for Circus Maximus, the Vatican, the Supreme Court, and Spanish Steps. The route took a more roundabout way around the city, and I think this was partially because the streets get narrower as the city comes together. The whole route is actually over an hour so I felt like we saw a lot in that time. We got off the route back at the train station and tried to get breakfast/lunch, but once again Google Maps failed us! The restaurant was supposed to be open at 11, but they said the kitchen wouldn’t be ready for another 30 or so minutes. We ended up grabbing something quick at a small chain cafe. We bought tickets for the Colosseum and headed back on the bus. 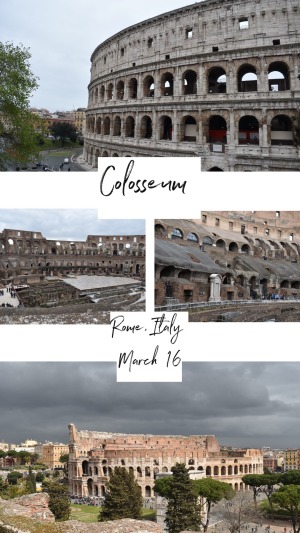 I have a memory of me as a teenager visiting the Colosseum for the first time. I touched the walls and thought I would be transported to the height of ancient Rome. Of course that didn’t happen, but I still got the same feeling when we went this day.

The Colosseum holds so much history and is an architectural marvel. It’s just as massive as it looks. I really love the underside of the main fighting floor. It’s crazy to imagine lions living there, or even how the Romans staged Naval battles in this arena!

I can’t believe we were even debating whether or not to go here, it was definitely worth it. The tickets also included access to the Roman Forum near the Colosseum. So after we got our fill of the Structure we headed there. We had two paper maps and they both told us incorrect information about how to get through the ruins. We used Google Maps to get out. The ruins were cool, but I think it this instance I would have preferred a guide, they were quite extensive, which I didn’t realize when we went in.

After hopping on the bus back to the train station and picking up our luggage, we finally headed to the Airbnb. Our approximate arrival there was around 4:30pm since we spent so much of the day being tourist. The apartment was near the Spanish Steps. Unfortunately, when we arrived one of the codes to get in to the room was not working. We waited for over an hour trying to get in touch with the host because he was on a flight. In the interim we ate pizza at the place directly underneath the apartment. I charged my phone there.

We finally got in and we were impressed with the accommodations. The bed was king sized, a proper place to sleep after these few days in such small beds! It was still a studio, but this apartment felt more like a hotel than anything.

We quickly left our things and headed out. We read on Atlas Obscura that there is a cat sanctuary at the Largo di Torre Argentina, where Julius Caesar was murdered! We wanted to get there before it closed so we could see more cats, but because of the delay with the Airbnb we just missed it! There were still some kitties who were hanging out on the railing around the ruins. All the cats at the sanctuary have some sort of medical issue, but are treated by vets who work for the sanctuary.

We continued our dusk/night tour of Rome by going to the Pantheon and the Altare della Patria. We ended our night by seeing the Trevi Fountain and Spanish Steps. Back when I was 13, I wished in the fountain that I would return to Rome, I’m happy to report that my wish came true! 🙂

Even though it was night, there were still tons of people around the Trevi and Spanish Steps. I’m glad we got a chance for photos and made a wish, but it all felt rushed! Because we hadn’t done nearly enough walking this day, we walked up the Spanish Steps and back down behind the church on our way toward the apartment, but also in search of a meal. We finally found a decent place that had really great pasta. Definitely redeemed from our Florence pasta experience! Additionally, we splurged on dessert with both Tiramisu and Panna Cotta, and both were divine!!

Rome was wonderful and I’ll happily go back any time.

Click through to see all our pictures from Day 6! 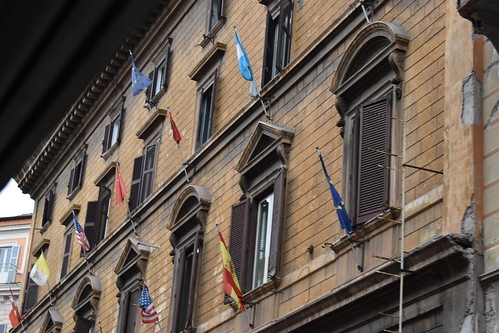