Our adventure continues! (See days 1-3 in Paris) We took an Air France flight from Paris to Florence. It was only a couple of hours in the air and when we arrived it was sunny and warm! Our Airbnb was located in the same place Galileo Galilei lived! It was on a narrow one way street in a downtown area close to restaurants! The studio was on the second floor, and it had a Murphy bed, which honestly, wasn’t that comfortable. But we made due since it was only for a short stay. Immediately upon settling in we went our for lunch at Trattoria Sant Agostino, which was affiliated with the Airbnb since we were able to get a 10% discount.

We bought a TurboPass for our time in Florence, so we could get a walking tour and access to museums.  It took us about 20 minutes to walk from our apartment across the river to the start of the tour. The walking tour began at Cathedral of Santa Maria del Fiore. I had been to Florence before when I was a teenager and I remember being here, but I can’t remember a lot of my experiences from that time. The cathedral was so beautiful! The tour did not include going into the cathedral, so we started walking toward the Piazza della Repubblica. We stopped at a church that was a former mill, where you could still see the hooks in the ceilings! We then saw the lucky boar of Florence, Fontana Del Porcellino,where if you rub the mouth with a coin and then it falls into the drain and it’s supposed to ensure our return to Florence. It was a fun little stop that I wouldn’t have seen if we weren’t on the tour.

Next we walked through the Uffizi Gallery plaza (not going inside), to see the Ponte Vecchio bridge, famous for the fact that it is covered so the ultra wealthy of once upon a time Florence could travel above the peasantry. Now it’s filled with jewelry shops. This is where the tour ended. It was nice to have a guide. By this time it was only about 2 or 3. We walked from Ponte Vecchio to Galleria dell’Accademia, where the Statue of David lives. Luckily Florence is pretty small so it wasn’t far to walk. I love all the narrow streets in the city. You can walk on them, but step to the side when cars drive through. Feels cozy and welcoming!

Galleria dell’Accademia also has other things going on including medieval artwork, including a painting debating immaculate conception–men debating women’s bodies since forever!–a musical instrument exhibit, and a collection of plaster casts of famous sculptures. I’m glad there were other things to see in this museum. As impressive and worthwhile as the Statue of David is, there’s only so much to see there. The exhibits and collections were a nice learning opportunity for these new-to-me topics!

After we checked out the museum, we were hungry so we got pizza at a place nearby (second lunch!). Four cheese pizza was bellisimo! We also ordered a coffee to keep up our energy! While we were on the walking tour we found out about the Piazzale Michelangelo, a plaza on top of a hill that looks over the city. We decided to walk back through the city to find this epic viewing point. As small as the city is, walking from one side to the other was definitely a choice that we made! ha! As we were walking we definitely saw Kyle Bornheimer, aka Teddy (Amy’s ex-bf) from Brooklyn 99. Josh and I looked at each other and were just like, is that a famous person?? It was such a random experience! We crossed a bridge over the Arno River and walked along the water. When we reached the Porta San Niccolò (a large tower) we walked up the hill behind it to reach Piazzale Michelangelo. It’s not for the faint of heart, it’s a climb! After all the walking, it was exhausting! But wow! Stunning sunset views:

Our day was not over, we ended up walking back to our apartment because we wanted to do laundry. This is a ten day trip and we only had carry-on suitcases so we needed to refresh already. I brought an extra duffel bag for souvenirs or as it turned out, laundry! We found a laundromat around the corner that had detergent and little laundry essentials. It was self-service, and definitely catered to tourists. We accidentally filled a broken machine with coins and detergent so we had to set up a separate washer, paying twice (ugh!). Before we headed out, I left my phone at the apartment to charge, so while Josh stayed with the clothes, and I went off to look for band-aids and gelato. The gelato search took longer than either of us would have liked, especially with no communication, but this neighborhood was so nice I didn’t feel like I was in danger. I live in NYC so I think I would know how to navigate! Anyway, the gelato was amazing! The laundry didn’t take much longer and soon we were ready for dinner!

Our dinner was at a place called Gurdulù. It was so amazing. The food was fantastic, the atmosphere was great, the whole vibe was just what we were looking for. It was right around the corner from the apartment! Unreal.

Click through to see all our pictures from Day 4! 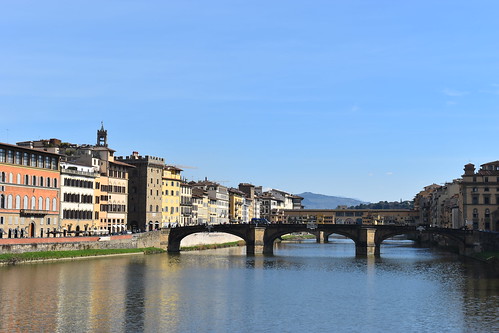 This was a big day! We were visiting a Tuscan winery. We found this experience through Airbnb. It was reasonably priced and spoiler alert, it was a great time! We woke up early to get to the bus station. We received directions for how to get to the vineyard from the host and took a local bus service. Luckily we met another couple who were taking the bus there as well so we kind of teamed up to make sure we were getting to the right place. It was approximately a one hour bus ride into Tuscany down one-lane roads. It was a gorgeous day and the countryside was amazing!

There were eight people altogether who were at the tasting (all Americans, ha). The Tenuta del Palagio is a Vineyard that has a mini-castle that used to be the area’s prison! They also used to keep wine cold in the dungeon! So neat to learn the history of the business. The host also told us the process for making white, rose, and red wines on the property. If we had gone in the summer we would have been able to pick grapes, but it’s not the season for it. So the first half of the tour was learning about the different wines, checking out the massive cases, and getting to know the family and history of the property.  The second half of the tour was the tasting. The vineyard is known for it’s red Chianti Classico and Chianti Reserva. We also tasted the house white, rose, pure grain alcohol, and dessert wine, with a selection of cheeses, pepper jellies, and house made olive oils. It was very filling! The two hours were over pretty quickly, and soon the hosts dropped us off at the bus station for our way back to Florence. We ordered the two red wines, a bottle of white wine, a red pepper jelly, and a yellow pepper jelly to be shipped to us from Florence. The shipping cost nearly as much as the products! Worth it though because we didn’t have to carry it for the remainder of the trip!

Back in Florence we had lunch at a place in Piazza della Repubblica before heading to our next stop, the Zefferelli Museum. We had access to this through TurboPass. Franco Zefferelli is an Italian director, producer, and stage designer. His body of work is amazing. The level of detail on all the productions was stunning. There were many sketches, paintings, dioramas, costumes, and other miscellaneous designs that were on display to showcase how good of an artist he is (at the time it wasn’t clear if he was still alive, but according to Wikipedia he is).

I think one of the most striking visuals was for the (never made) film of Dante’s Inferno. I definitely got the vibe of Labyrinth as I was looking at them, but on a more grand scale. Looking at sketches about hell was kind of scary, but fascinating!

This evening we made plans for dinner at L’Ov Osteria Vegetariana, a vegetarian restaurant near our apartment. I saw it on Google Maps and decided to make a reservation. Let me tell you, Google Maps has been the biggest let down the whole trip. We’re always finding all mediocre places to eat from looking at this map. This restaurant was no exception. The atmosphere was cool and hip (though the decor was pulling from too many different countries, and not in a good way), but we ordered our first dish we knew something was wrong. It was only stuffed artichoke, but it was like eating dirt. There was no seasoning, the stuffing was some kind of potato or root vegetable? I’m not even sure. Just because food is vegetarian doesn’t mean it has to be flavorless! The artichoke was also barely edible. The soft part at the bottom of the leaves was barely existent. Josh ordered a pumpkin stuffed pasta and I ordered risotto for our main dishes. My risotto was salty, but ultimately not bad, but Josh’s meal was pumpkin with chocolate sauce and thyme. It was the most bizarre combination of flavors and he could barely stomach it. I don’t blame him. We did not order dessert, but we did have to finish a bottle of wine so that was a bit awkward with the waitstaff asking if everything was OK. How do you even respond to that? When we left we looked for a quick place to grab a pizza for Josh to eat. We were wholly disappointed with the food here. It’s Italy! All the food is supposed to be amazing, how can you mess it up!?

Our day ended on a bit of a weird note, but we made the best of it and headed to the apartment.

Click through to see all the photos from Day 5! 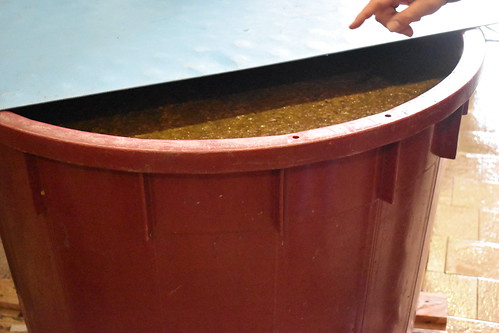