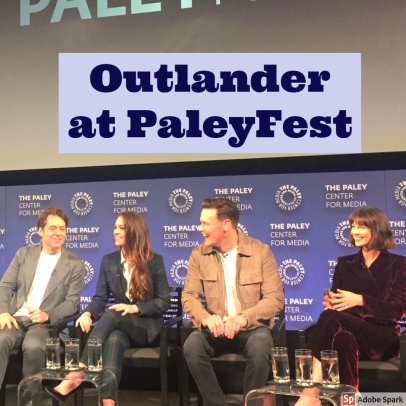 I’ve been to a few Outlander events in New York and I’m always happy to see the cast and hear about the upcoming season. This year I was able to go to the PaleyFest Event at The Paley Center for Media on October 5th. This was part of a larger media tour that also included a panel at NYCC.

In preparation, I binged the third season the week prior to refresh on what happened. It’s been a while since I watched the show and read the books, so I didn’t want to be caught up by a potential spoiler. I also decided to buy something Outlander-esque to wear to the show. I found this plaid pinafore dress at Buffalo Exchange for $23!

There were plenty of fans waiting outside when I arrived, which was prior to the stars taking photos in front of the step & repeat sign, so I was quickly seated. My friend Liz got me a ticket and I was in the third row!

You can watch the live stream here, but below are my impressions of the event. 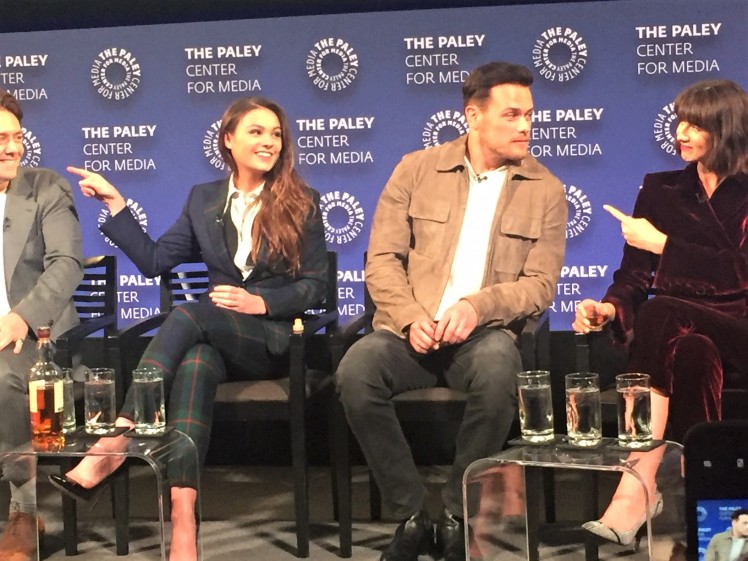 The next part was a clip of Jamie and Claire speaking about the “American Dream,” which is a longer scene of what appears in the trailer for Season 4. Since the concept of the “American Dream” doesn’t exist yet, Claire is just telling Jamie what it’s about and how they are apart of it. I knew going in that there would be clips, but I was really hoping for a screening! We all wanted it!!

More questions followed this clip and Sam talks about how we are finally getting to see these characters settle in one place. Caitriona also mentioned that Jamie and Claire finally have a strong union as well, after what they have been through together. The calmness of their relationship is for the purpose of setting up the bigger story of “the history of America,” as Sam described it. At this point a lot of the conversation was directed towards Caitriona and Sam. I really enjoyed Cait’s answers here, sharp, smart and interesting!

Next we saw another clip of Brianna and Roger. Setting up the scene, Sophie described Richard’s character, Roger, as forward and there was a good bit of banter around this because Richard disagreed, but then they was an interjection from the audience calling out Bri for kissing Roger first. (The call out lady was sitting directly next to me! Awk) In the new scene Bri and Roger are on a road trip and Roger is driving. The scene is recreating a scene from the book about the “minister’s cat” when they are flirting and almost drive off the road when Bri kisses Roger. It was really cute to see them together. As book readers know, it all goes down hill from here, but at least we get this cute relationship bit!

There’s a lot of discussion after this clip that can’t really go anywhere because of spoilers, like how in the trailer we hear Frank’s voice and see Bri going near some stones. Meril moves around these questions very well and the conversation was quickly moved on to the new villain Stephen Bonnet, played by Ed Speelers, and the other tension in the show with Jocasta. They touch on how Jocasta and Claire butt heads because Claire doesn’t believe in slavery and it’s hard for her to see it up close, but Jocasta comes from another world and doesn’t know any better, which is very sensitive subject to delve into in the show. Ron spoke more on this: “The show is not a platform to go and make big statements, the show is a story about these people, these characters, and different times, different morals. You try to tell the story in the most truthful way that it is, and not to gloss over it, and not to romanticize it, and at the same time not to be strident and make judgments from the 21st century about it.” They know that people watching the show will bring their own experiences to watching. I think this was also apparent in Season 3, when the arrive in Jamaica. At least they are not glossing over the topic and the history.

And on sensitive subjects, Meril mentioned that Outlander is non-SAG, so when they needed Native American actors for this season, they hired First Nation actors from Canada to play Cherokee and Mohawk natives. I’m glad that they hired native actors to play Native Americans, and Meril and Ron were obviously very aware that they should be hiring indigenous people for those roles, and they mentioned that Matt Roberts, one of the other producers, spoke with a Cherokee leader and other consultants during writing and filming to make sure they were getting the culture and language correct, and doing things the right way, but at the same time, I was dismayed to hear that they couldn’t hire natives from America. So I’ll be interested to see how this plays out in the show and the reactions from the native community. 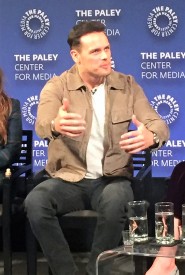 To wrap up the panel, Ron mentioned on the of the challenges for him was finding the rhythm of the season in a big picture sense. Sophie touched on her biggest challenge was researching what happens to Brianna and making sure she does right by that character (*cries*). Caitriona said that her challenge was seeing a new side of Claire as more domestic and not as forward driving of the action compared to last season when we saw her as career driven (which in my mind called back to the earlier conversation about how her and Jamie were settling down.)

At the end, it was really great to see how these people get along and how much they bring to each of their characters. It was a good opportunity to get to know them a bit more and get excited about the show! Season 4 premieres on November 4th!

4 thoughts on “Outlander at PaleyFest!”