My friend, Tqwana Explains, is having a birthday this month and she wanted to do a Taco Crawl because she’s awesome and clever. I did not know what to expect except lots of food in my mouth! Happy Birthday!

The day was blustery, sunny, quintessential spring day. We were running late and decided to forgo the subway for driving around to all the restaurants. Our first stop was Tacos Morelos, a hole in the wall Mexican restaurant in the LES. The smell of fried vegetables, tortillas, and other spices was a fantastic and welcoming embrace. We each got a taco.

I guess I should make a disclaimer that I’m a vegetarian so I heavily judge my tacos based on the filling! Let’s continue.

I ordered a soft shell vegetarian taco. It was so savory! There were all sorts of grilled vegetables, mushrooms, zucchini, mushrooms, peppers, lettuce, and cilantro. Plus, plenty of cheese, and a guacamole sauce. 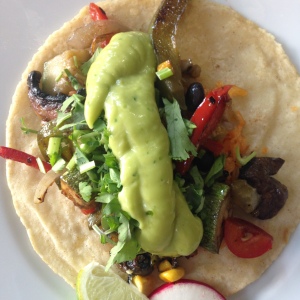 I was very impressed with this dish. I did end up eating it all, despite my aversion to cilantro and peppers. I also put the HOTTEST jalapeno sauce as my condiment of choice. WOWZA. I drank two glasses of water in quick succession. Since it was our first restaurant we forgot that we were going to be eating a lot of food today, so we ordered another round with tostadas. I forgot to take a picture, but it was crunchy and overwhelmed with lettuce, inspiring this tweet:

We realized we were running out of time and we quickly paid and left and walked to our next destination, Downtown Bakery.

This restaurant is the type for take-out orders or Seamless Delivery. It also has the most perfect tacos for drunkenness–the hard shell was especially greasy (bonus points!). 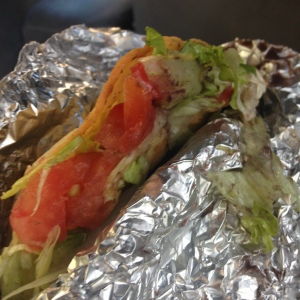 My taco was bean and cheese with lettuce, tomato, and sour cream on a hard shell taco. I suppose this is the less traditional “Mexican” taco, probably more closely related to Tex-Mex, but to me it was perfection (and we weren’t even drinking!). This was a rush destination. We ate in the car on the way uptown to our next taco stop.

Taco Mix is located in Spanish Harlem at 234 East 116th Street #1, New York, NY 10029. I forgot to take a picture of a sign or menu, but it’s another hole in the wall place. I had to use the bathroom there and everything was wet and I had to squat over the toilet, the whole place made me feel uncomfortable and claustrophobic. But look at this taco! 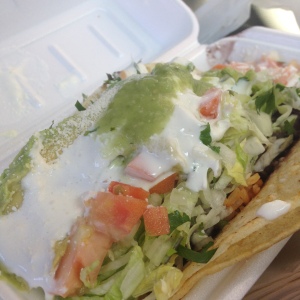 Rice and beans, lettuce, tomato, sour cream, an avocado slice, cliantro, plus green salsa on the side. It was very big and very satisfying. I wish I would have had a fork because there was so much that fell out! It was great.

Sabor a Mexico was our next and last stop.

This was a taste of Mexico if you do not really want any thing fancy with your food. I asked that my taco did not have cilantro on it and what I received was a tortilla with beans and cheese. 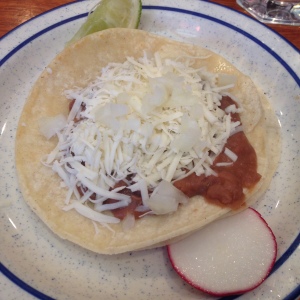 No lettuce, tomato, or anything –besides onions. I used the lettuce and tomatoes from Tqwana’s taco when I ate mine. I was very disappointed.

The day, overall was a success. We ate a lot. It’s really hard for me to rank the food because I dislike cilantro so much!

Next year we hope to try it again! #TacoCrawl2k16